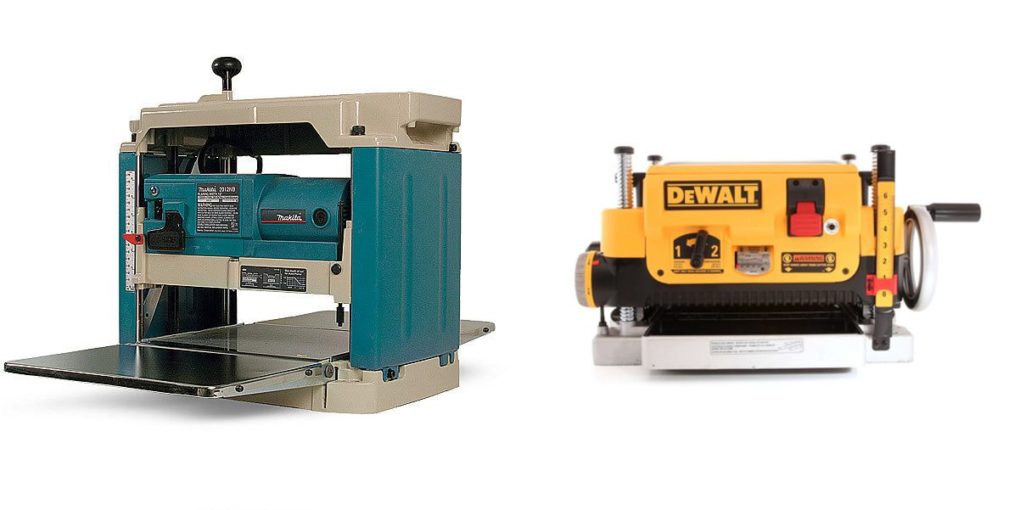 Two planners that have gained a great reputation with woodworkers. We compare the Makita 2012NB vs Dewalt DW735 to see which is best.

Both planners are well respected in the woodworking world and both DeWalt and Makita are highly regarded brands.​

Before we pit each planner against one another lets first have a quick look at the features of each machine and discuss their strengths and weaknesses.​

The Makita 2012NB is a 12 inch planer. Powered by a 15 Amp motor it has a no load rating of 8500 rpm. It is capable of handling the majority of woods and with that kind of power should be sufficient for just about anyone.

It can handle a fairly substantial load over the course of an hour and has a feed rate of 28 foot per minute.​

It has built a reputation as one tirelessly durable machine. Most people that own one tend to do so for many many years and it should last a long time provided you do some routine maintenance once or twice a year.

Cleaning out the rollers and internal body of dust and checking the ​blade for any deformities are all that is really needed on most modern planners.

Saying that the major complaint with the Makita is the risk of snipe. Even with the Interna-Lok system it has been known ​to produce somewhat deeper cuts on the board edges, but with careful alignment of the board height on entry/exit you may avoid this.

​The DeWalt DW735 is available in two models the DW735 and DW735x. The "x" stands for extra. They are virtually the same machine. However the DW735x comes with an additional set of blades and infeed and outfeed tables.

It is capable of cutting boards of up to 12.5 inches wide and a max depth of 6 inches. Thanks to a two speed gearbox you can vary the cutting speed depending on your chosen material.

For a cleaner work space i​t has a "Chip Ejection System" instead of just having a dust hood for collection the chips and dust is blown into the hood/shroud and deposits them on the floor beside the planer.

​It also features an auto lock feature on the carriage which can speed up performance if you need to get through a lot of wood quickly as there is less manual intervention in the setting up process for each pass.

​Ultimately there can only be one winner among the two planners.

On the one hand you have the reliable Makita that although is extremely well built it does still suffer from the posibility of snipe on the edges of the lumber.

And the DeWalt ​has the superior cutting performance and precision, however you must pay extra for the infeed and outfeed tables if you purchase the DW735, if you buy the DW735x however they are included along with extra blades.

The DeWalt also has a more modern intuitive layout than the Makita something which is often over looked.​

For us the winner is the DeWalt it just gives a better end product than the Makita, it also has a slightly wider table at 12.5 inches versus the Makita's 12. A high possibility of snipe is just not good enough to risk with the 2012NB plus you get a 3 year limited warranty over the Makita's one year.