We’d all like to equip our woodshops with every conceivable piece of equipment, but unfortunately, most of us have limited budgets. So, when comparing a miter saw vs. a radial arm saw, how do you know which of the two suits you best?

A direct comparison is necessary. Both tools have circular blades that can cut through wood of various thicknesses, but if your pockets aren’t that deep, you’ll have to settle for one. This guide is here to help you make the right decision.

The Difference Between Miter Saws and Radial Arm Saws

Radial arm saws possess a higher cutting depth. They’re better suited for cutting through the thick wood. On the other hand, Miter saws can cut through dimensional lumber but with comparatively lower cutting depths.

Miter saws are more portable than radial arm saws. For the latter, you’ll need to install a station from where it will operate. If you need something to lob around to different work sites, a miter saw is the better fit.

Although miter saws can provide four types of cuts (bevel, compound, double compound, and miter), radial arm saws are capable of a much larger variety of cuts.

Why Should You Get a Miter Saw?

It’s Easier to Use

The benefit of using a saw that’s less powerful is that you get more control. Miter saws are relatively powerful, but they’re not as powerful as radial arm saws. Therefore, they’re easier to control, which means you get more precision when cutting through different types of wood.

It’s also a good power tool since the blade’s rotation allows you to streamline different cuts, which even beginners can accomplish with relative ease. 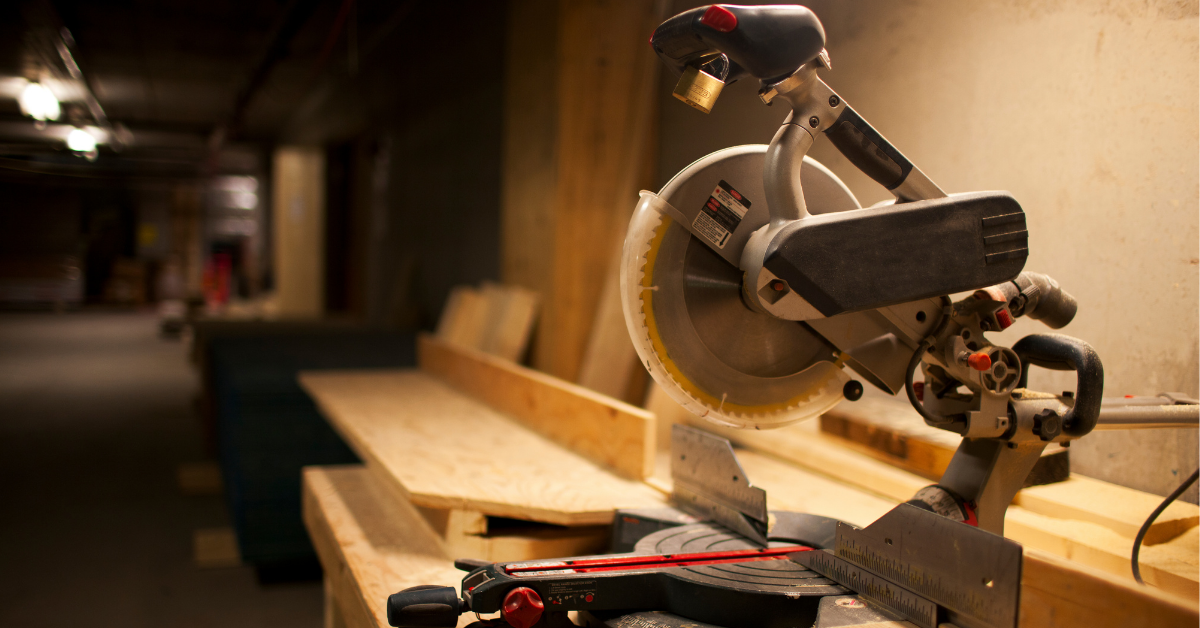 Miter saws are perfect for users hunting for versatility. They come in several variations, which give you the ability to carry out additional operations.

Most miter saws come equipped with safety guards and dust collectors. These features allow you to work on lumber without worrying about injury or damage to your workpieces.

Why Should You Get a Radial Arm Saw?

It Has Powerful Cutting Depth

A radial arm saw is better suited for cutting through thicker, tougher lumber thanks to a larger blade diameter. It’s suitable for simple woodworking, but it can go the extra mile whenever you need it to.

Radial arm saws can rotate in multiple directions, and if it’s cutting versatility you’re after, you’ll not feel restricted by their highly maneuverable design.

It is not smaller than a miter saw, but it typically needs less space than a table saw. So, if you’ve got limited space in your woodshop, yet you don’t want to sacrifice power for compactness, a radial arm saw is a great option.

It Provides a Wider Variety of Cuts

Aside from cross-cuts and rip cuts, which a miter saw can perform comfortably, radial arm saws can also cut dadoes and rabbets. This ability comes from its flexible depth adjustment, which lets you create L-shaped and U-shaped cuts across the width of lumber. When Should You Get a Miter Saw?

When Should You Get a Radial Arm Saw?

When you need power, you’ll find that radial arm saws are far more practical. They offer a higher cutting depth, which means you can power through much thicker lumber than a miter saw will allow you to.

The Best Miter and Radial Arm Saws to Buy

The DWS780 checks all the boxes as far as professional miter saws go. It can hold a 12-inch blade, slide to increase cut depth, and create double bevel (left and right), compound, and miter cuts.

You shouldn’t need any more convincing if you’re looking for a miter saw that does it all, but we’re going to go in-depth anyway.

Ease of use is guaranteed by CUTLINE technology, a blade-positioning system that adheres to the cut line automatically for unrivaled precision and visibility. When working in the dark, you can use the built-in LED light to create a shadow on the cut line for better visibility. Dust collection is also a package deal, and with this saw, up to 75% of the dust you generate will be conveniently disposed of.

With ten positive stops, the miter detent plate also improves cutting accuracy, which is why this is ideal for beginners. Even the bevel scale is oversized to make adjustments easy. It miters 60 degrees to the right and 50 to the left. On top of it all, it’s very compact and lightweight (only 58 pounds), so it’s easy to store and transport.

Packing an impressive hi-torque motor (15-amp) and capable of holding a 10-inch blade, there’s not much you can’t cut with this radial arm saw, which features adjustable depth settings, laser guidance, and a slide-rail, which increases its cut capacity. With this affordable power tool, you can cut more than just wood in more than one way. It supports cutting angles of up to 45 degrees, so it’s suitable for making joints too.

You can tilt it to make bevel cuts ranging from 0 – 45 degrees, not to mention 50 – 50-degree miter angles. There are quick stops at 0, 15, 22.5, 30, and 45 degrees, so it’s user-friendly as well. The blade can bevel 45 degrees in both directions (left and right), and a quick-release lever allows you to swap it out quickly when you need to cut other materials (or when you need to switch from cross-cuts to rip cuts.

Apart from the 10-inch blade, it also comes with a dust bag and a hold-down clamp for added stability. Laser guidance gives you much better cut accuracy while the high-end TCT blades cut more cleanly through materials of varying toughness. It also features a taller fence and an extended neck, features that allow you to work with larger workpieces.

Biscuit Joiner vs Domino Which is Best?

DeWalt DCS391 vs DCS393
"This site contains affiliate links to products. We may receive a commission for purchases made through these links."