The miter saw vs. chop saw debate shouldn’t really be a debate. On the one hand, you have a powerful cutting tool designed for hard, ferrous metals. On the other hand, you have a versatile saw made specially for angled and beveled cutting. They’re two very different types of saws, but that may not be obvious to those that are not familiar with the construction industry’s colloquial terms.

Do you need a miter saw or a chop saw? To answer that question, we need to start by defining what each type of saw does best.

You may know it as the chop saw, the abrasive saw, or the bacon slicer if you’ve been in the construction industry long enough. Chop saws often use abrasive discs made of grit, resins, and fibers instead of metal, so they don’t cut materials as much as grind their way through them. It’s the most effective design for cutting through hard metals. 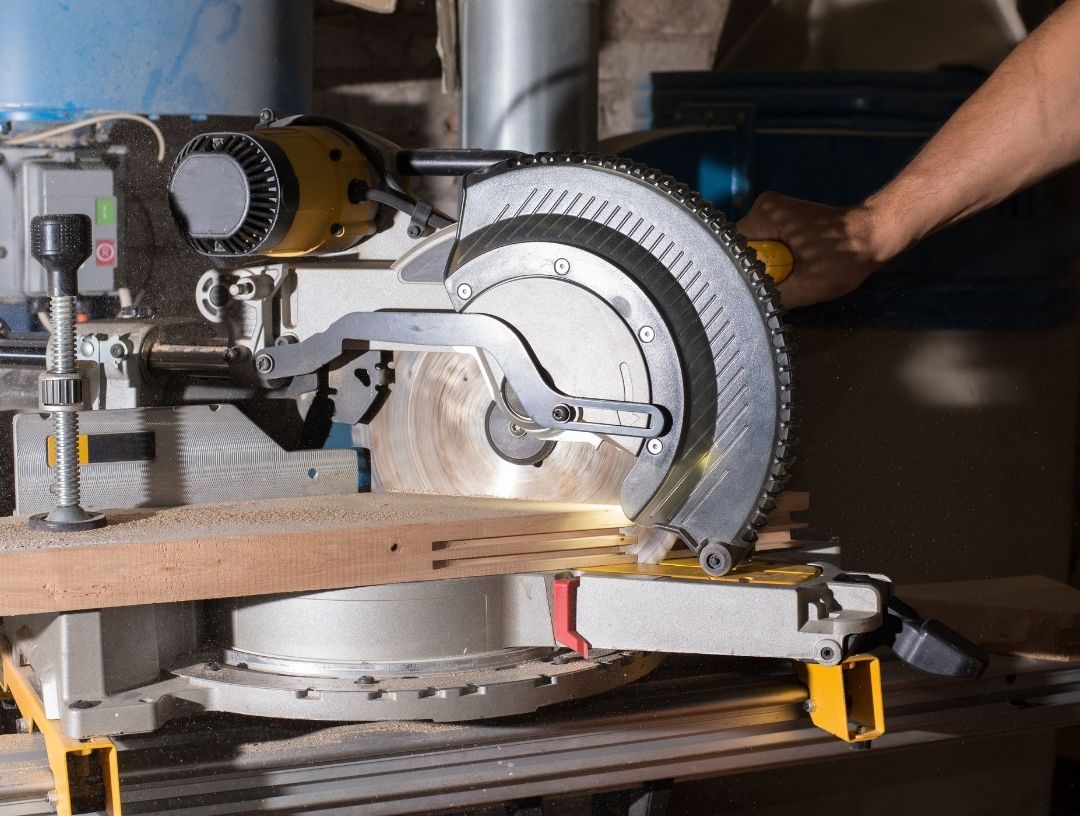 Apart from abrasive discs, chop saws also use specialist tungsten carbide-tipped (TCT) blades. Abrasive chop saws have the power to cut through almost any material, but they do have their downsides, mostly due to the grinding process they use to cut.

This process is messy and dangerous one because it creates a lot of sharp burrs, which can be a cutting hazard. Grinding also causes abrasive blades to lose a lot of material, so the more you use it, the smaller your cutting diameter gets. The abrasive chop saw’s most significant drawback—arguably the reason why no one but career professionals use them—is the amount of heat they generate.

You’ll probably need a hot works permit before you can use an abrasive chop saw because it creates a lot of sparks and makes the material too hot to touch. The heat can also mar or discolor the surface of the material, so chop saws are not the best for making fine finishes.

TCT blades don’t generate as much heat, sparks, or burr. They also cut faster and last longer than abrasive discs. But, they’re not as good as powering through hard materials, so they have a shorter lifespan. They’re also prone to snagging and tearing, especially when cutting thin materials.

The miter saw is all about cutting precision at multiple angles. These saws tend to have high-RPM motors, rotating bases, and tilting blades, which is how they’re able to make angled and beveled cuts. The only downside to using a miter saw is that it will not cut through anything harder than ferrous metal.

A woodworker won’t care about that, though. The versatility offered by miter saws trumps their comparatively low cutting power, especially since the ability to make angled and beveled cuts is far more important when working with low-density materials.

The standard cutting angle for miter saws seems to be 45 degrees, but many of them can manage up to 60 degrees, all the angles included. 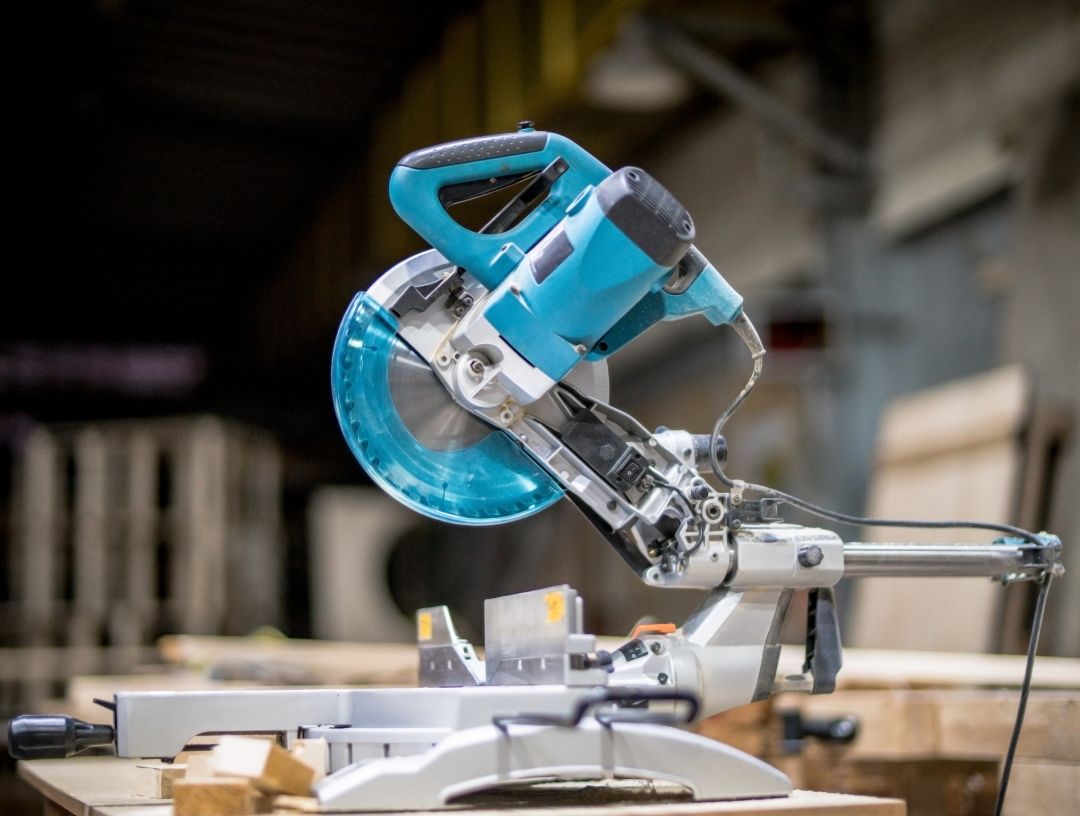 Bevel cuts, made possible by tilting blades, are a necessity for projects like crown moldings, where you must consider the angles and pitches of the walls and ceiling. A good miter saw will tilt from a 90-degree vertical position to 45 degrees. A great saw, on the other hand, will give you three more angles between 45 degrees and 48 degrees. An extraordinary miter saw will have gauges featuring crazy angles such as 31.6 degrees and 33.9 degrees.

The versatility doesn’t end there. If you want to make wider cross-cuts, you can go for a sliding compound miter. It’s the same compact design but with a telescoping rod that allows the motor unit to travel back and forth.

How Are Miter Saws and Chop Saws Different?

Chop saws have lower RPMs, but they eventually cut through anything you put under them. Unless you work with ferrous metals routinely, you likely won’t need such amounts of cutting power.

A miter saw is a wood shop essential, but with the right blade, you can cut through tougher materials. Some miter saws will handle plastic and aluminum just as well as the wood. Many cut through non-ferrous metals without problems, provided you get the right blade for the job.

Both saws can cut through a wide range of materials, but only miter saws will give you some of the more complicated cuts. If you need angled, beveled, double-beveled (left and right), and compound cuts (combination of bevel and miter cut), you need a miter saw.

The DeWalt DWS779 is a sliding miter saw that’s capable of making compound cuts. Its blade bevels from 0 – 48 degrees left and right, giving you far more versatility for bevel cuts. Miter accuracy can be ensured using a machined base fence (if you have one) and the cam-lock miter handle, which lets you pick miter angles quickly and accurately.

It can make 2 x 14-inch cross cuts on dimensional lumber at its default miter angle, which is 90 degrees, and at 45 degrees, the sliding miter saw makes 2 x 10-inch crosscuts. Its sliding fences are tall enough to accommodate 6 ¾-inch bases vertically, and it comes with two horizontal steel rails, a clamping system, and linear ball bearings—all of which amplify its cutting accuracy.

It also equips you with an automatic dust collection system that’s capable of collecting up to 75% of the dust you generate, and you’ll be making a lot of sawdust if you intend to use its 15-amp motor to its maximum of 3,800 RPM.

The DWS780 is everything most people need in a miter saw. Feature-wise, it’s not lacking at all, whether you want to make compound cuts or swing the blade left or right for a bevel cut. It’s also mounted on telescoping rails, and as a sliding miter saw, it’s got excellent ability to make wide crosscuts.

It’s remarkably lightweight for a tool of its caliber—58 pounds is manageable enough for storage and transportation. It’s also very user-friendly, with an oversized bevel scale, a detent plate with ten positive stops, and an integrated blade positioning system called CUTLINE for enhanced cutting visibility and accuracy.

Included in its long list of features is a dust collection system and XPS technology, which uses an LED light to illuminate the cut line better.

Best Circular Saw Blade for Plywood
"This site contains affiliate links to products. We may receive a commission for purchases made through these links."