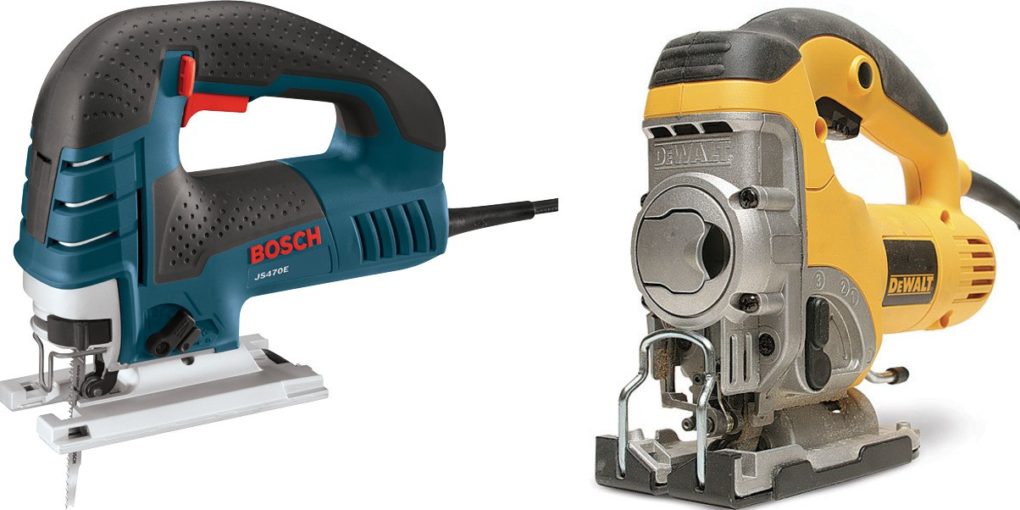 Wondering which corded jigsaw is right for you ? We put the Bosch JS470E vs DeWalt DW331K against each other as the top 2 jigsaws available, which will be the winner?

​A corded jigsaw can make quick work of cutting sheet on site and at home. They are a quick and easy way to get a quick curve or to take the ends off of stock lumber. Both of these models are the best available from their respective brands so it's the Bosch vs DeWalt jigsaw face-off.

​The Bosch and DeWalt are probably the best jigsaws on the market right now. Before we pick a winner lets have a quick look at the features of each.

The Bosch JS470E is powered by an industry leading 7 Amp motor. It can run at between 500 and 3100 strokes per minute.

It has a variable speed controller that allows you to set a max speed and then adjust the speed up to the maximum strokes per minute via the trigger.​

Max bevel cutting angle is 45 degrees. The shoe is made from die-cast metal with a heavy and sturdy steel insert.​ The heavier shoe helps to lower the center of gravity which makes for a smoother travel across the cutting surface.

​The Constant Response Circuitry keeps the power and strokes per minute consistent throughout the cutting action. A constant speed means a smoother more balanced cut across a large cutting surface.

The JS470E ​has a maximum cutting capacity of 5-7/8 inches for wood, 7/8 inches for aluminum and 3/8 inch for mild steel assuming you are using the appropriate quality blades for each material.

Other added features include an ambidextrous lock button for continuous operation and an on-board dust blower to help keep the line of site clear.​

​The DeWalt runs a 6.5 Amp motor and has a variable speed range of between 500 and 3100 SPM(strokes per minute) with a stroke length of one inch.

​It has a variable cutting action thanks to a 4-position orbital action setting control. The blade action is counter balanced to help reduce vibration through the body which helps to reduce user fatigue.

​There are positive bevel detents at the most popular angles of 0 ,15, 30 and 45 degrees enabling the shoe angle to be accurately set each and every time.

To protect softer materials it has a non-marring shoe cover.​

An integrated dust blower helps to keep the cutting surface clear and reduce dust build up in and around the cutting point and the shoe/body of the saw in general.​

​When it comes the Bosch JS470E vs DeWalt DW331K for us the Bosch is the winner. It is slightly more powerful has a heavier sturdier build and has a few more added usability features over the DeWalt.

​On the power  front the Bosch JS470E is a clear winner it is one of the most powerful corded jigsaws available at 7 Amp vs the majority of other jigsaws(the DeWalt included) 6.5 Amp.

Both saws have the same variable speeds of between 500 and 3100 strokes per minute. ​The variable range is adjusted via the trigger. However the Bosch does allow you to set a maximum and still vary the speed up to that maximum using the trigger so it has a slight advantage here.

​The Bosch is also heavier and has a beefier shoe. Both models have integrated dust blowers.

​To close both are very capable and solid performers however the Bosch does pip the DeWalt marginally on performance.