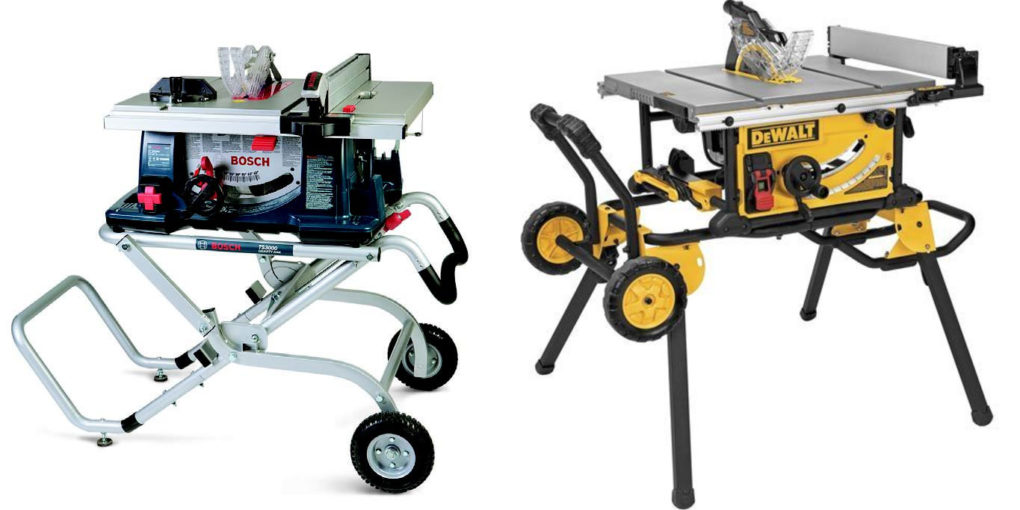 Looking for a highly portable job site table saw? Chances are you have probably already narrowed down you search between the Bosch 4100 vs DeWalt 7491.

Both are highly regarded table saws that can handle a lot of abuse on a busy site whilst still maintaining a high level of quality.

Before we compare the Bosch 4100 vs DeWalt 7491 lets first have a quick look at each saws features. Below you will find a review of each saw and then the comparison after.

The 4100 from Bosch is a 15 Amp portable table saw that comes with a stand called "gravity-rise". The stand folds down quickly and easily to allow the saw to be rolled easily on the wheels on the frame.

​The Bosch is a 10 inch table saw that has a 25 inch rip capacity which can be extended out to 40.5 inches which is certainly a nice to have feature if you find yourself cutting large sheet material.

The 15 Amp motor spins the blade to a no-load speed of 3650 RPM.​ At 3650 RPM the 4100 is slightly slower than a lot of other table saws but it is still a solid performer especially with a high quality blade.

There is also a smooth start system and Bosch constant response circuitry that is found among its other power tools which gives a smoother power output through the range.​

That 15 Amp motor is able to spin the 10-inch blade to a max no-load speed of 4800 RPM. At that speed with a high quality blade it can handle a lot of abuse all day long including hardwoods.

The DWE​7491RS does not feature DeWalts "Guard Detect System" which can be found on the DWE7499D. This protection system basically disables the blade unless the blade guard is installed. However, there is a bypass switch should you want to use it.

We also compare the DeWalt DWES7499D against the DWE7491RS and give an overview of each features. The 7491 wins out as it is several hundred dollars cheaper than the 7499 and is just as capable.

​The choice between the Bosch 4100 vs DeWalt 7491 is certainly not down to price. They are both roughly marked at around the $500 price point depending on where you purchase them from.

​Although the 4100 has the extendable rip capacity it is somewhat under powered compared to the DeWalt. There are also a lot of reports about the fence on the Bosch not being 100% true.

So on these issues alone the 7491 is the preferred choice.​